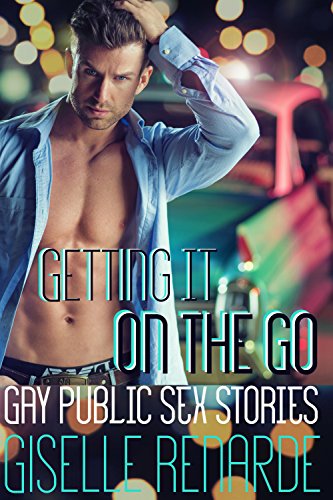 Book: Getting It On the Go - Gay Sex In Public by Giselle Renarde

I'm not exactly known for writing gay erotica. Most people know me as a queer author of lesbian, bisexual and transgender fiction. Actually, my gay romance stories have been included in a number of bestselling and critically-acclaimed anthologies from Evernight Publishing. I don't write a ton of gay male fiction, compared to other genres, but I've collected a handful of the ones I've retained publishing rights to and assembled them, for your reading pleasure, in Getting It On the Go. (Props to my girlfriend for coming up with that title! Isn't it great for an exhibitionism erotica mini-anthology?)

About Getting It On the Go:

What's better than getting lucky? Getting it on the go!

Maybe they stumble into that special stall in the bathroom of a gay bar. Maybe a student and a professor fall for each other when a blizzard strands them at the side of the highway Christmas night. Maybe three strangers find common ground on a broken-down bus.

Whatever the situation, you know things are going to heat up fast when these guys get it on the go!