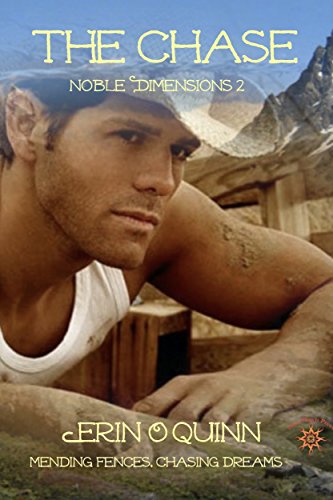 Book: The Chase by Erin O'Quinn

about this book: Start with a smartass gay man named Brew Lloyd, back home in the hick town of Noble, Nevada for a few weeks. Add a shy man two years older named Chase Grayson, unsure of his sexuality and buried in work on his dad's ranch 15 miles from town.

Now throw these guys together: Make the rookie Brew get his hands dirty putting up fences and cleaning cattle tanks, while Chase, working alongside him, tries to hide the growing timber in his denims.

A few more ingredients are in order. Brew's father has long ago turned away from him, ashamed and afraid of his son's homosexuality. Chase and his own father are being threatened by an unscrupulous federal agent who's trying to enrich himself by selling out the Grayson's ranch to a silver mine interest.

Now stir the pot to include a hot attraction, the mystery of a missing mine claim, and a trail of graft and corruption that all end on the ranch, a place called "The Chase."