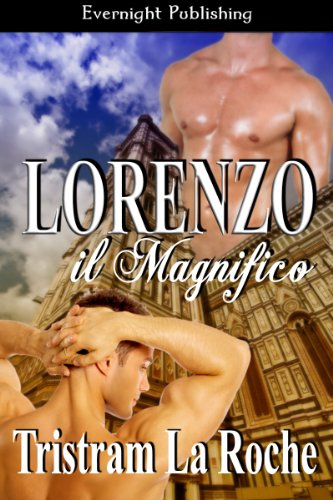 about this book: Lorenzo il Magnifico is Tristram La Roche's second novella and, as the title might suggest, is set in the stunning Italian city of Florence. Otherwise known as Lorenzo the Magnificent, Lorenzo de' Medici was an Italian statesman and ruler of the Florentine Republic during the Renaissance. Not surprisingly, there is a street named after him and, knowing Florence well, La Roche has created a sexy character, Lorenzo, with an apartment in that very street and who himself is magnificent.

Disillusioned with his life in dismal Leeds, Luke heads to Florence for a break and also to do some research for his master's degree. When he comes across a handsome waiter on his first night he has no idea where things will lead, but when the waiter asks him out Luke jumps at the chance.

Lorenzo il Magnifico is a delightful, sexy romp through the streets of Florence and contains some explicit man on man love as well as group and public sex.