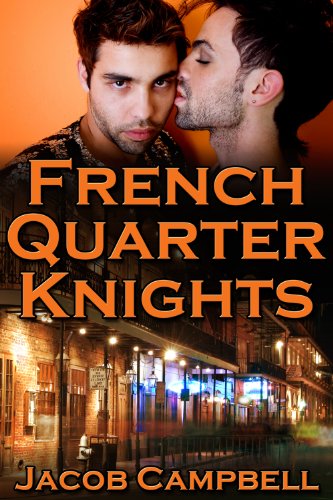 about this book: FRENCH QUARTER KNIGHTS is a gay drama/erotic fictional autobiography of Thaddeus "Tadpole" Merton who secretly is worth $2,000,000 dollars from a sex abuse settlement which he has to keep secret; he is rescued from a mental hospital by an older gay man who is into some dominance of Thaddeus, a relationship Thaddeus wants to escape, and although he is sexually active with many persons, he tries to find a relationship that allows him real gay love. The novel is an explicit erotic journey through all the sex venues of New Orleans at the height of the Sexual Liberation Movement, 1983, and is pre-HIV promiscuity with a difference.

Thaddeus is an authentic person, has some problems such as epilepsy, insatiable appetite for men, good drugs, and adventures about New Orleans in and out of the arms of several men; and, there are group sex episodes, nights in the baths alone, sex arcade action, gay bars with male nude dancers and even drag shows. The height of the sexual action is a FULL MOON PARTY just before Southern Decadence in New Orleans at Jewel's Bar where over 300 men simultaneously merge into a sea of sex, drugs, and poppers. Just as seriously as Thaddeus pursues his erotic pleasures, he seriously tries to walk a middle ground and forms what he hopes will be a long-term relationship with a sports car driving, piano teaching, older man.