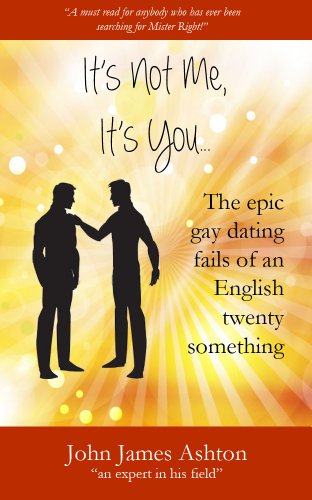 about this book: I've recently published my first piece of gay comedy fiction, entitled "It's not me, it's you..." The book, which is written under my pen name (John James Ashton), is available as a digital download on Kindle, PC or iPad through Amazon and the first few chapters are free for anyone to read.

When I was in the LGBT at York Uni, we had many great events but never shared ideas about gay literature - for some, I think it can be really helpful to identify with gay characters they read about and relate to situations that occur in such stories. With so few books out there targeted at gay audiences I wanted to have a go at creating something fun and comedic for gay and gay friendly people to read and enjoy. People seem to view what I've written as a sort of 'chick-lit' style beach read.

"It's not me, it's you..." tells of the trials and tribulations of gay dating today and is predominantly comedy with elements of pathos. The book is inspired by two great gay comedy writers; Armistead Maupin and Joe Keenan. Their clever wit and depth of characters is what I have aspired to achieve with my book.

I hope people enjoy it and it becomes a staple of gay literature.