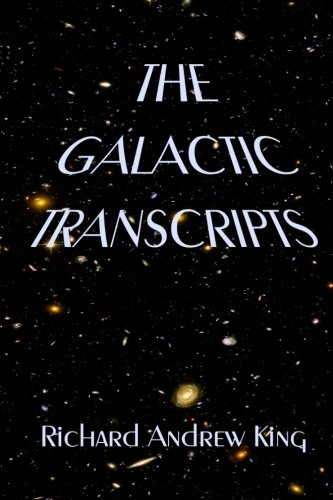 about this book: The subject of UFOs (Unidentified Flying Objects) pervades every country in the world and has for millennia. In spite of governmental cover-ups, the growing mountain of evidence is becoming too large to ignore, especially with sightings by a growing cavalcade of professional pilots, military and law enforcement personnel, and other trained observers. The television medium is awash in ever-emerging shows concerning this mysterious UFO phenomenon.

With new technologies coming into play, as well as more and more archeological discoveries being made supporting the existence of extraterrestrial crafts and beings, it's almost a sure thing that UFOs and the intelligence that controls them (living or technological) exist.

THE GALACTIC TRANSCRIPTS is a collection of thirty-seven purported alien messages transmitted to a small group of American individuals in the late 1950s and early 1960s. One of the group's members was a professional man who claimed he had seen a real UFO, a sighting which prompted him to investigate further, subsequently leading him to becoming a "receiver" of the alien messages. Interestingly, this man kept a personal journal, the last entry to which was "Border to Infinity" within hours of his death. What prompts a man to write such a mysterious statement? Is there a connection between the man's UFO sighting, his involvement in the transcript receiving group, and his diary's final statement to the world?

THE GALACTIC TRANSCRIPTS is a word-for-word replication of the original messages, which were typed using a 1950's typewriter of the time. Computers were not available to the common public in those days. The messages in the Transcripts are fascinating, detailing many events, philosophies, principles and descriptions of other worlds and civilizations in space. It is a fascinating read. Are the messages in the Transcripts true? You be the judge. They have been published to assist you in your search for the truth of UFOs and an alien presence in our universe.

Available in Paperback and Kindle formats