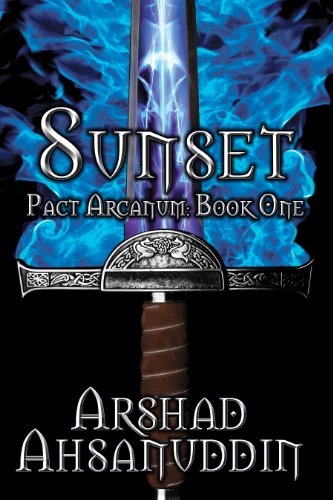 about this book: Sunset was my first attempt to write a novel. Most authors bury their first novels deep in the attic, never again to see the light of day, which is why they are called trunk novels. I didn't know that, so I went ahead and showed it to a few people after it was done.

The one editor I showed it to explained in detail exactly why it wasn't even close to 'done', and listed what I did well and what I did...not so well. After a year of tweaking and rewriting, I finally got it into a form I thought was okay, but I was still nervous about going out and stumping for agents to pick me up, so I decided to self-publish. Little did I know that I actually opted for more work! I became a man of many hats: author, publisher, marketer, and graphic designer. Not to mention doctor, which is my day job.

The learning curve has been steep, but the experiences and friends I found along the way have made all that work worthwhile. As I became more knowledgeable about the craft of writing, I went back and revised the original manuscript until it met my new standards. It's still not perfect, but then, what is? Here then, is Sunset, the first book in the Pact Arcanum Saga:

Nick Jameson is a successful musician living in American of the future, but secretly leads a double life. He is a Daywalker, a vampire redeemed, and represents a hidden society existing in the shadows of human civilization. When he is forced to reveal himself to stop a terrorist attack, he drags three mystical races into the light of human scrutiny. Coexistence seems a far-fetched goal, and Nick finds himself at the forefront of the conflict, trying to forge a peace between humanity and the children of magic. To focus, he must resolve his own romantic entanglements, but that may prove just as difficult. He is loved by two men: Rory, the Redeemer, who opened the door to the vampires' salvation; and Lorcan, the ambassador of the vampires who oppose his work. Despite their best efforts, neither of them can shield Nick from the genocidal war that is brewing in both the mortal and immortal camps, a war that just might destroy the world.