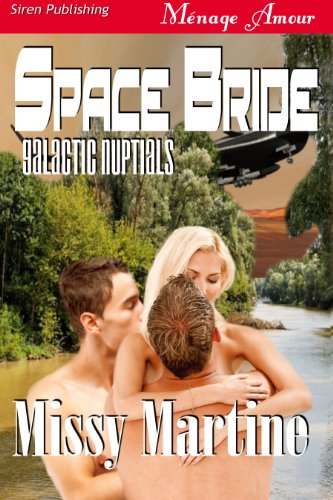 about this book: Caleigh Davis is doing her best to raise her younger brother since her mother died, but the young boy is quite a handful. She's shocked when she receives a letter from Galactic Nuptials saying she's been accepted as a mail order bride. Her young brother filled out the application and submitted it without telling her. Now he can be in a lot of trouble if she doesn't agree to a trial period with her groom on another planet.

Tarik longs for a mate for him and his brother Andon. They've tried before, but neither of the other women were agreeable to staying on the remote farm planet. Andon doesn't want to risk his heart again, so Tarik doesn't tell him when he sends for a new bride. And worse, he doesn't tell the agency that Caleigh will a bride for two brothers, instead of one man.

Can they ever move forward with so much deception between them?

• 5 Hearts - "Overall, this was just a really well written book with characters you enjoy, a good story and some amazing sex scenes. I also really hope that one of the future books will involve Jess and her boss Tarooka Meekers who's the founder of Galactic Nuptials. I know for sure that this is a series I'm going to be watching for future books to come out!"
— Amy Hopkins, The Romance Studio

• 4.5 Nymphs - "I am looking forward to more from this author, and this series in particular."
— Amazon Nymph, Literary Nymphs Reviews

• 4 Couples - "I have to give this four couples, it was an enjoyable book and was hard to put down. I would have liked to see more of Kevin's side of the story as he was an important character to it. Otherwise it was interesting take on the mail order bride theme."
— QueenBee, Confessions from Romaholics