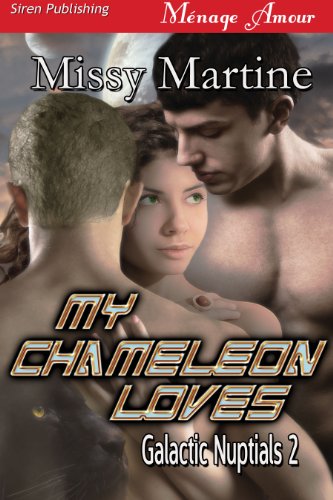 about this book: My Chameleon Loves - Galactic Nuptials 2

Jeni Montgomery is in big trouble. She's been investigating her best friend's disappearance and her snooping led her to Gracely Investments. She knows they're responsible but she can't prove it. What she can prove is their illegal money laundering activities. When she uses her extensive skill and hides their money in off-shore accounts where they'll never find it, they promptly have her arrested for embezzlement.

If she fights the charges and wins, they'll let her out of jail and she'll be a target for the men who disposed of her friend. It's safer for her to plead guilty and stay in jail.

Brothers Zintssar and Kernztssar are on Earth for a diplomatic mission. They're at the courthouse when Jeni is brought before a judge. Zintssar scents her and knows she's their mate. They want to take her back to their home, but they can't just walk off with a convicted prisoner.

Jeni's given a choice. She can go to prison for her crimes, or she can be released as a mail order bride and sent to the brother's home world. It's too bad the brothers are totally honest with her. What will her decision be?