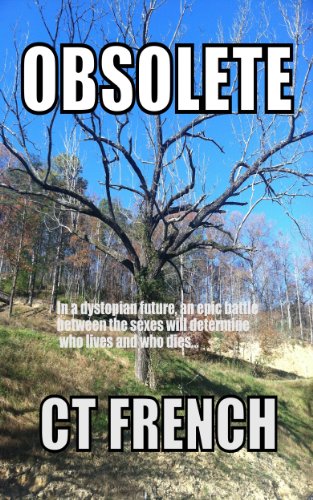 about this book: Obsolete follows 18-year-old Madison after a pandemic nicknamed the Blue Pox has swept across the world, killing off more males than females, most under the age of 50. Madison joins forces with Katherine, an anthropologist in her former life, and they settle on a small college campus in East Tennessee. This quickly becomes a women's commune where Katherine assumes the leadership role, calling this community Androk. When former prison guard Callie joins the group, things begin to change. Callie and her band of deputies begin capturing and imprisoning males, whom they refer to as the "others", for labor and procreation purposes. As the youngest member of the commune, Madison does not agree with what Callie and Katherine are doing but Katherine has become her surrogate mother and she feels loyal to her. However, when Callie captures Jonah, Madison must choose between her love for Katherine and the attraction she feels toward Jonah.

I have long wanted to write a book about a futuristic dystopian world where more women than men survive, with women attaining power and fighting to keep it. This is book one of the Obsolete series which introduces the characters and conflict.

The primary readers are teens to adults. It is what It falls under several genres including action-adventure, horror, sci-fi, teen fiction, women's fiction, suspense and romance.

The title was easy because in this future world men would be obsolete if not for the fact that they are needed to ensure the world continues through procreation.

The cover is a picture I took myself of a tree in the Smoky Mountains which I feel depicts a desolate, abandoned world.