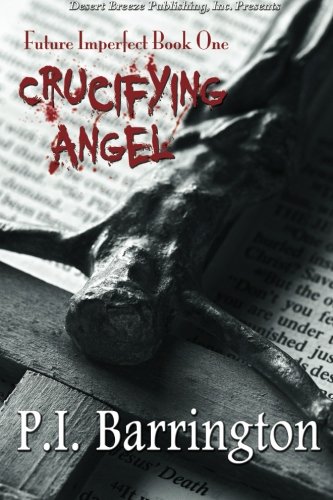 about this book: Crucifying Angel kicks off the Future Imperfect futuristic crime thriller trilogy. It's set in 2032 Las Vegas where the environmental and financial disasters have the Las Vegas Police Department to work slightly outside protocol. When a serial killer with an agenda is linked to a mysterious pseudo-religious cult, Homicide Detective Payce Halligan and her new partner, British ex-DCI Gavin McAllister must deal with the threat, their own personal demons and a growing attraction to one other.

This book was both my first novel and first published novel. I set it in Las Vegas because I've spent so much time there and it just fit the setting of a burgeoning dystopian society. It's futuristic and more than a little on the sci-fi end, lol.

Once I decided on a serial killer villain, the title kind of just fell into place. Crucifying Angel has a religious connotation and indicates a gruesome act.

I think the Future Imperfect trilogy is fairly commercial—I hope that it is broad enough to appeal to a wide audience. I think crime thriller, sci-fi, and romantic suspense readers will enjoy it since all of those are major elements in the books.

I'd like to tell readers that these are fast paced thrillers, not as gruesome as they sound and that I hope they enjoy reading them, especially Crucifying Angel, as much as I enjoyed writing them!