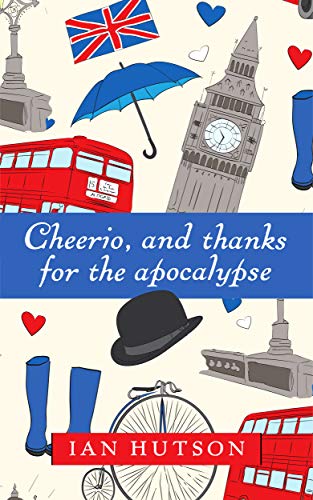 Book: Cheerio, and thanks for the apocalypse by Ian Hutson

about this book: England is probably the only country on the planet where, during any apocalypse, orderly queues would form and everyone would wait for their turn to morph into a zombie or to be zapped by murderous aliens. As the atomic missiles grew larger in the sky most of us would be either discussing the weather forecast or dead-heading the roses one last time. Plagues may come and plagues may go, but that's no reason to not put out a note for the milkman cancelling the yoghurts and the sliced white loaf. Civilisation may end somewhat abruptly, but that's no reason not to be polite about it all.

Cheerio, and thanks for the apocalypse is seven very tall, highly speculative, sort-of-possibly-science-fiction but mostly fun tales, not all of which are actually apocalyptic. Once London has been nuked the survivors do quite nicely thank you very much, and in Space, Time & Pipsqueak there's definitely a glimmer of hope for bald bipeds with thumbs, thanks to the dog-of-deep-thoughts, Pipsqueak.

These stories take the bitter, stale, curled-up prawn sandwich of current real life and they turn it into a succulent feast of food-poisoning with crusts. Old people find out that a carefully-planned retirement isn't all that it's cracked up to be, politicians do what they do best (which is nothing good at all, other than being self-basting) and a world-weary troglodyte genie who has been holed-up in Lancashire since before time began has his work cut out with three of England's greatest free-thinkers. Rather like the author, God frequently loses the will to live, and Horace Eugene Wilberforce Death rides out on a moped with ape-hanger handlebars.

In fact if you have a few hours to kill, this book will kill 'em deader than modern western culture's chances of a long, happy and healthy future on this planet.

Written entirely in English English, featuring both Oxford and Cambridge commas and filled with as many of the florid glories of the language as may still be mustered, the stories are set in an England before "hashtags", before universal offence and outrage, and when diversity and inclusivity were a part of basic good manners, not a part of an ugly mob rule.

Cheerio, and thanks for the apocalypse is the fourth book to have dropped out of this gin-soaked author who, due to a certain fiscal crisis caused not least by all of his books being non-international non-prize-winning non-best-sellers, lives and works on his narrowboat on England's creaking old canal system, looking under-fed, under-washed, and understandably unworried (having nothing left to lose). Born by accident and immediately lost since in time, space and meaning, the author's favourite distant nostalgic memory is money, and his hobbies are cynicism, alienation and a constant struggle with understanding why anyone would bother (with anything much) when life is short, brutal, and insufficiently equipped with classic hot-custard puddings such as treacle tart and jam roly-poly. Frequently licked by dogs, always hissed at by cats, and generally given a wide berth by fellow humanoids, the author is at a loss to explain why everyone uses the word "apocalypse" as though it were a bad thing. Cheerio.