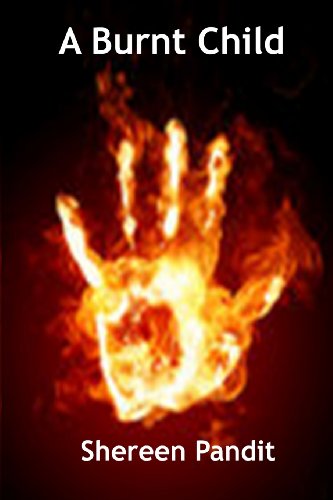 about this book: A Burnt Child is about friendship and betrayal. It is also about the connection between the personal and the political – in this case, the conflict between being a full-time political activist and the desire to be a mother. The central character, Yazz, has been betrayed once by her friend Lily. She refuses to expose herself to further betrayal. Hence the title reflects upon the adage: "A burnt child dreads fire". At the same time, the title refers to the key element of the plot which revolves around the search for a child who may or may not have died in a fire decades before the start of the book.

I started writing about 12-13 years ago when I was on sick leave. Bored at home, I went to the computer and found, amongst all my thesis materials, some unfinished short stories and poetry. I tidied a few up for my own amusement. A while later I was at the Poetry Library in London (a brilliant place) when I discovered some entry forms for short story competitions. I sent one of my completed stories off. I couldn't believe it when I won.

In a matter of mere months, with only a few more published stories under my belt, I found myself invited to be the keynote speaker at a prestigious literary festival in Ireland. Several short story awards, readings at literary festivals and commissions followed. Soon an agent called me up wanting to represent me. I agreed but she would not countenance my putting out a collection of the (very successful) short stories unless I wrote a novel first.

Despite being an avid reader of novels, I didn't have the first idea of how to write one. The short stories had just popped out. When I finally produced a manuscript of what was eventually to become "A Burnt Child" the agent had all sorts of problems with it. I felt that she wanted me to write what she wanted, rather than what I wanted, which was to write the novel which had always lurked at the back of my mind. We parted company. I went on writing short stories, returning intermittently to the novel when publishers kept rejecting the collections. Nobody in the UK, they said, would publish a single author collection if that author didn't have a novel out. This, despite my many prizes and the fact that my stories were travelling the world, being translated, being performed, being broadcast.

A year ago a literary organization awarded me a mentorship, based on my published work. I felt that the time was finally right to finish the novel, since I'd have the guidance of an experienced tutor. I left the short story collections (there were 3 by then, mostly of published stories) and finished A Burnt Child with her help.

In the ten years or so of working intermittently on A Burnt Child, the book underwent many changes. Most of the changes which went into the final version had to take into account how the world has changed in the last decade, mainly with the advent of mobile phones, email, the internet, social networking, etc which impacted a lot on the plot.

The hardest part of writing the book was "killing my darlings" ie cutting out much of the political background - some of which I felt was my best writing - moving with the plot. It was hard also to keep at it when all the time I was tempted to write some short stories. I couldn't find the time to do both with my mentor wanting several thousand words every few weeks.

The best part was that I actually had someone who drove me constantly forward, not letting me revisit things to perfect them before moving on. Or perhaps the best part was actually finishing it.

Then came the big question. What to do with the manuscript? The mentor loved it, friends and family love it, but would publishers? Could I face the hurt of rejection of something I'd devoted at least one whole year of my life to?

The solution was suggested by another writer – that I approach a small arts council funded publisher. This was in effect self-publishing but it came free. They were wonderful with all the technical stuff, though.