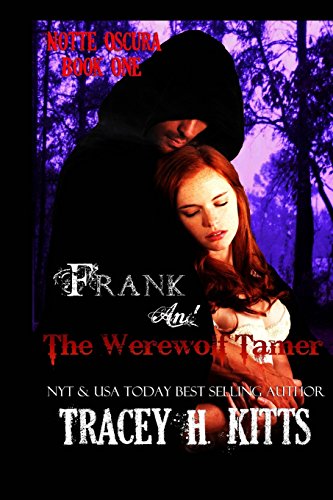 Book: Frank and The Werewolf Tamer by Tracey H. Kitts

about this book: I see no reason why Frankenstein can't be sexy.

Seriously. Why should Dracula and The Wolfman get to have all the fun? In Mary Shelley's story, when Victor Frankenstein first looked at his creation he saw him as "beautiful."

I've always thought he had the potential to be not only beautiful, but sexy. We already know he's supposed to be tall and dark, the rest shouldn't be a stretch. Ha. Ha.

I'd like everyone to know that my story Frank and The Werewolf Tamer has nothing to do with Mary Shelley's version, or anyone else's for that matter. This is my version of a classic creature, with a completely different background. The man in my story, Frank Eastwick isn't your traditional sort of monster. To me, he isn't a monster at all.

I can't tell you all of his secrets in one post, or I'd give away the story. Maybe the best way to describe him is to share an excerpt. This is the first time the heroine of the story, Katherine, sees Frank.

• Frank and The Werewolf Tamer, excerpt:

It was late January and there was still a chill in the air, even in Florida. I'm not sure if it was the warmth coming from inside or fate that made me walk into the main arena that night. The air was filled with the scents of cotton candy and lots of liquor. Needless to say, Notte Oscura was for the twenty-one and over crowd.

I hadn't taken in any of the attractions on my previous visits, so I had no idea what I was walking into, or why most of the women in the crowd reeked of sexual arousal. I heard the crackle of electricity, and then I saw him. He was well over six feet tall and stood directly in the center of the stage. He was stripped to the waist and though he man had many scars, they did not distract from his beauty. His head was down and mounds of long, black hair trailed over his chest. It looked like the beginning of a live S&M show. His arms were bound to what appeared to be enormous antennas, the way he was turned showed off the well sculpted muscles of his arms. It also revealed what looked like a completely metallic right elbow. He twitched slightly and lightning arched between the polls and from numerous other places around the stage. As the flashes of light and crackle of electricity came to a peak, he tossed back his hair and with a primal yell, broke free from his chains.

He smiled. The crowd went wild and in that instant, looking at that smile, I knew I was lost. The lightning stopped and with a dramatic flair the tall man slipped into a cloak.

"My name is Frank, and I'll be your host this evening. Welcome to Notte Oscura."

The crowd cheered again and I took an involuntary step forward. Though he used his hair to cover the right side of his face, I could tell he had another scar there. I was trying to get a better look when someone pinched my ass. I can think of few things that piss me off more. I reached behind, using my superior speed to grab the pincher by the wrist. I was a bit surprised to feel fur, but that didn't stop me. I twisted the arm with a violence born of the frustration of my night and locked his elbow in place, taking the werewolf to the floor with a pain-filled howl. This all happened just as Frank said, "Please allow me to introduce…" His words trailed off as the spotlight hit us. "Our new werewolf tamer!"

Frank began to clap and the crowd soon joined him.

"You're hurting my arm," the werewolf growled, though he was careful to keep his voice fairly low. Obviously, he didn't want the crowd to hear.

"I should break it," I said, pushing down harder to emphasize my words.

He yelped again, but I let him up. He ran onto the stage, snarling and growling on all-fours. With a gesture from Frank, I followed.