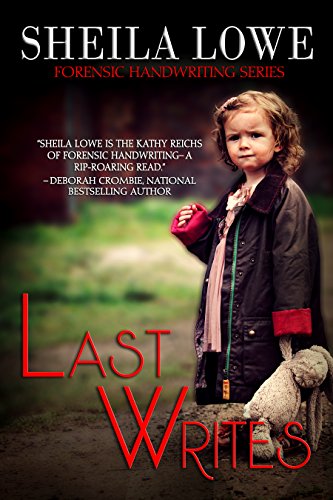 about this book: What does a religious cult have to do with a missing three-year-old and an old stuffed bunny?

Claudia Rose's best friend Kelly Brennan is stunned to learn that not only does she have a young niece she never knew existed, but the child and her father have gone missing. Kelly's sister Erin ran away as a teenager and joined an obscure religious sect, the Temple of Brighter Light, where she married one of the elders and went to live at the Ark, the TBL compound tucked away in the hills of Hemet, California. Now, frantic, Erin shows Kelly and Claudia the subtly threatening note her husband left behind.

In a fortuitous coincidence, Claudia catches the attention of the sect's leader, Brother Harold, who hires her to analyze the handwriting of some members he believes are betraying him. She and Kelly receive an unheard-of invitation into the Ark, where they begin to look for little Kylie Powers. What they find shocks and terrifies them, and they soon learn that getting out of the Ark is not as easy as getting in.

I wrote this book to work out some of my own issues, having grown up in what I now perceive as a cult that is very similar to TBL. This religious group is controlled by groupthink, and actively teaches that independent thinking is wrong. My own mother, who sees no problem with this teaching, has shunned me since I left the religion in 1985. To be more accurate, I was kicked out and told that I was clearly a danger to the congregation. I am so grateful, for if I had not been given the boot, I would probably still be a member today. As it is, it took fifteen years for me to get free of their insidious teachings.