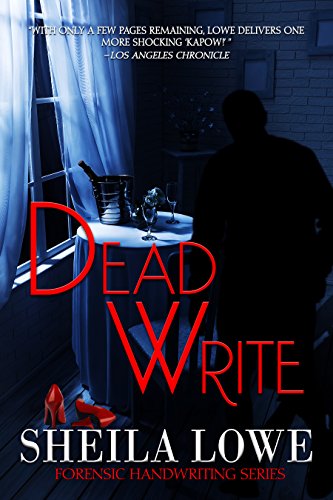 about this book: In this, the third book in the Forensic Handwriting Mysteries, we learn more about Claudia Rose and a background that she had kept long hidden, even from herself. With her relationship with LAPD detecive Joel Jovanic teetering on the brink, she grabs an opportunity to flee to New York, sending Jovanic a clear message that he is unwilling to accept.

An early morning TV appearance leads to a new client for Claudia. Grusha Olinetsky, an eccentric Russian baroness insists on flying Claudia to New York to analyze the handwritings of members of her high priced dating club. What Claudia doesn't know until she gets there is that young members of the club are unexpectedly dying in strange ways. Her competitor and nemesis, Andy Nicholson, missed some important red flags in the handwritings of some of Grusha's clients, and it's Claudia's job to uncover which ones.

While in The Big Apple, missing her lover, Claudia is forced to confront the demons of her past and face the reasons for her reluctance to allow their relationship to progress to the next level. With Joel's unexpected help, Claudia uncovers stunning information about the baroness that will lead her into a world of greater darkness than she bargained for.