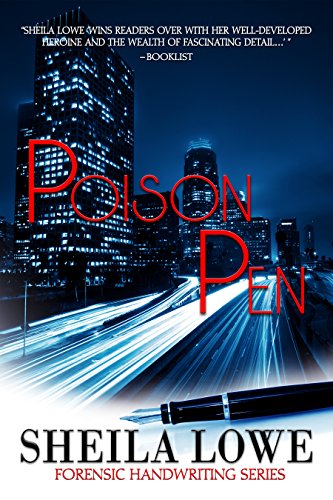 about this book: Poison Pen is the first in the Forensic Handwriting Mysteries and introduces handwriting expert Claudia Rose. The book opens at the funeral of Lindsey Alexander, a highly successful Hollywood publicist who had more than her share of enemies. Questions hover around her death: did Lindsey kill herself as the note found by her body implies? Or was there something more sinister behind her drowning in the luxury Wilshire Boulevard condo?

The police say it's suicide, but Lindsey's associate hires Claudia Rose to analyze the note found by Lindsey's body, which simply reads, "It was fun while it lasted." Claudia's probing uncovers some dark possibilities--reasons for blackmail? Reasons for murder? When one of the players is brutally beaten, LAPD detective Joel Jovanic is brought into the case and together, he and Claudia work to uncover the truth.
Publisher's Weekly gave Poison Pen a starred review, calling it a "Dynamite debut." If you like Tess Gerritsen, Deborah Crombie, and Jonathan Kellerman, chances are, you will enjoy this series if psychological suspense.