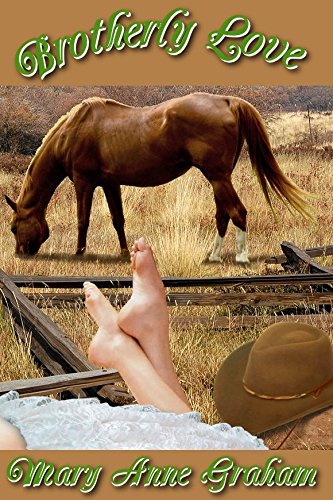 about this book: This book is the only one I've ever written that started from questions rather than a character or a plot. The questions: Why do we draw lines or build boundaries to try to limit love by defining it to death? What happens when those lines or boundaries move for part of a group but not for others?

Brotherly Love introduces the Jamison brothers who own a ranch in Texas. Together they've half raised a girl who came into their family as an orphan. Jessi would have been their step-sister, had her mother married their father. Instead, a tragic train accident killed the elder Ballinger and his bride-to-be, leaving Jessi as the only survivor. The little girl had no relatives so authorities brought her on to the Jamison ranch. The brothers adopted her by their vow, but never legally, and the little girl grew up adoring the eldest, Jake.

The brothers didn't know how to raise a little girl so they reared her as they had been raised and, naturally enough, she grew up to be a tomboy. One day she got into a bare-knuckle brawl and beat the dickens out of a neighborhood boy right outside the Church after services. Neighborhood matrons formed a posse, and soon, the Jamisons sent Jessi away to finishing school so she could learn the lessons that rough ranchers couldn't teach.

The exotic beauty who returns is far from the grown-up tomboy they expected and she has a brand new effect on Jake. He vows to try, but his heart and his body agree that Jessi isn't his sister. Unfortunately, the younger Jamison brothers still consider Jessi their sister and they vow to break up the romance. Jake must decide whether he's Jessi's brother or her lover and on that decision rests the fate of the whole family.

In writing this book I realized that in my life I've spent far too much time judging love and far too little time celebrating it. Love is far too rare for us to allow society to define it out of existence.