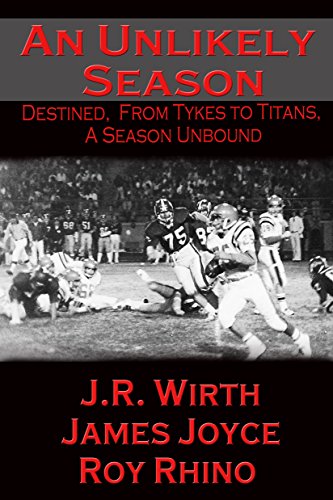 about this book: What happens when you bring together a group of disgruntled high school senior football players with a class of upstart juniors, and a group of coaches on their last attempt at greatness? It could be magic. These three stories are told from unique perspectives by the head coach, a returning All-League receiver, and an unlikely quarterback.

In the fall of 1977 there was an aura about the night, the likes of which none had never felt. It was just another Friday night in Azusa, California; or was it? The Gladiators of Gladstone High School were set to kick a late field goal that could solidify a brilliant come from behind victory. It was against the undefeated Walnut Mustangs who were the #1 ranked team in CIF Division AA. If successful, the Gladiators would have done what no other Gladiator team had ever done—win a championship.

exerpt
When the 28 of us Gladiators came out of the locker room following the halftime break, I could hear the Rocky theme. And when we entered the stadium, I saw it—the entire stands at Citrus College were filled with onlookers, fans, and scouts—seemingly thousands of them. I'd never seen anything like it before. Every one of them were on their feet, clapping and shouting at us. It was a moment dreams are made of, and that backyard quarterbacks fantasize about while visions of winning the Super Bowl rush through their neurotransmitters.

Chills ran down my spine. I'm pretty sure everyone else felt it too.

Through the next 24 minutes we fought from behind, staying right where we should be—close enough to win, but not in the driver seat.

Suddenly, we were there. The moment of destiny had arrived. There was a minute to go. We controlled the ball, and, with a few well-placed passes and a strategic run or two, we'd made it to the Walnut thirteen-yard-line. There we stood, only two points behind—with a kicker, Carlos Martin, we all had confidence in. What could go wrong, right?