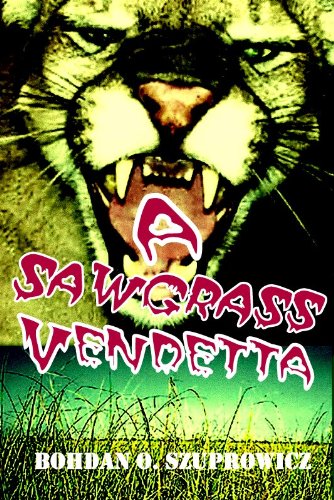 about this book: This particular E-Story is the result of two separate influences. On the one hand there was relatively wide media coverage of the future fate of the Florida panther. Many articles were written and TV talks were made, after a panther was found killed by a vehicle on a local road. Animal lovers from all over the country voiced their indignation and demanded retribution of some kind by the killer or killers who remain unknown to this day.

Simultaneously, in one of the writers groups there was a writing contest announced with the basic theme of "revenge". I did not pay much attention to any of those and was quite busy involved in research of my nuclear terror geopolitics ideas for my next E-Book titled "Nuclear Republic of Chiapas".

About that same time we have driven across Florida's Okeechobee region to visit friends on the East Coast, I think in Jupiter or thereabouts. On our return during the night I saw in my headlights a big cat animal dart across the road just in front of my car. It could have been a bobcat but may have been a panther because we crossed an area inhabited by both animals.

This event gave me the sudden idea to write about it. For some reason I remembered a Spanish joke about the testicular remainder dish served after a bullfight. A tourist who tried it once came back after another bullfight and ordered the same dish. It did not taste or even look the same as before. He questioned the waiter.

"Senor", the waiter answered, "it is the same remainder dish. But please keep in mind that the bull does not always lose the fight".

I adapted this concept to two pregnant females which resulted in this E-Story. You can call it an unexpected roadside inspiration.