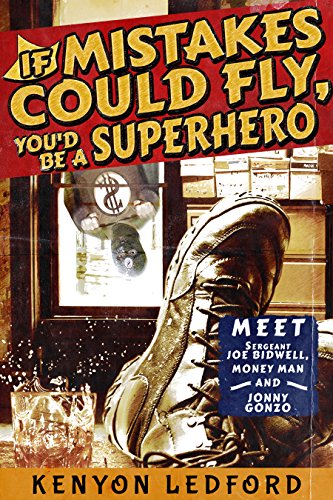 about this book: Flash fiction is supposed to punch you in the nose as hard and as quickly as possible. This collection of stories in, If Mistakes Could Fly, You'd Be a Superhero, does just that; but in a ha, ha way. Look, the city is under assault, and it's crying out to all Private Eyes, policemen, and even superheroes for help. Unfortunately, the city is under assault because of the aforementioned. It's not that the cops, P.I.s, and caped weirdos aren't doing their jobs, it's just that in most cases, they accidentally create new crimes while trying to solve current crimes, and in other cases, they are the crime.

Introducing Private Eye Jonny Gonzo, Police Sergeant Joe Bidwell, and Money Man; Superhero. Gonzo is an overzealous PI. Well, we assume he's a PI. Whatever he is, he sure gets under the skin of Police Sergeant Joe Bidwell, who would love busting Gonzo even more than the perps he's summoned to deal with. Now, if Gonzo can be a PI, then surely, Money Man can be a superhero. Money Man's true identity is that of a nondescript man. However, when he changes into his costume—er, superhero uniform, he becomes Money Man, who always shows up to help after decent folk have been robbed. Usually, by some nondescript man.

Speaking of superheroes, these rat-a-tat-tat stories have quite a finale. A regular length featured story with Batman and Robin, which takes place in Australia. It shows the true side of the Dynamic Duo, and includes a surprise guest star. If this book were an MMA fight, it would be all, jab, jab, jab, KNOCKOUT!

Get this book on Amazon!