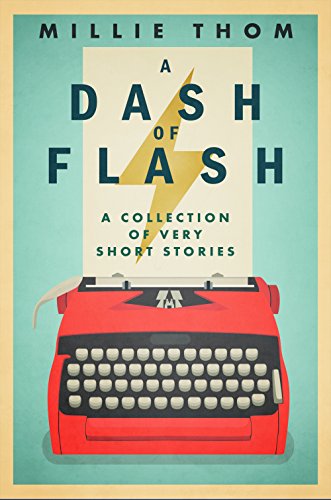 Book: A Dash of Flash - A Collection of Very Short Stories by Millie Thom

about this book: A Dash of Flash is a collection of flash fiction pieces and very short stories. The generally accepted definition of flash fiction is that stories must be between six to one thousand words. Of the eighty-five stories in my book, most are between two to three hundred words, a few have a hundred words, and several are between eight hundred and a thousand words. The stories are a mixture of contemporary and historical pieces, together with a few fairy tales and ghost stories, and many of them are accompanied by colourful images or photos.

The book came into being through my participation in flash fiction challenges on WordPress. I had already published the first two books of my 'Sons of King' trilogy on Amazon, and written a number of well received 'flash' pieces on my blog. I really enjoyed writing these short pieces, particularly the challenge of creating entire stories in so few words. The challenge is greatest with the really short pieces of a hundred words or fewer.

I eventually decided to work towards creating enough pieces to be published as a book. Many of the stories originally published on my blog have been modified or extended. Some, initially inspired by WordPress prompts, were written later and never published until they were included in the book. Others were written from photo or word prompts from elsewhere, a few from my own photos of places I've visited. All the longer stories were written specifically for 'A Dash of Flash'.

I chose the title because the word 'Flash' suggests that the stories are flash fiction, as well as describing the short length of each one (an alternative name for flash fiction is micro fiction). A flash is something that is over quickly and, although the tales are all quite different, each is a quick read, even those at a thousand words. I used the word 'Dash' as it not only conveys the idea of something done quickly (as the reading of the stories) but also that the book is fairly short. A 'dash' of something can mean a small amount of it and the print version of the book is 158 pages. One reviewer liked the 'easy-to-manage bite-sized pieces' and another stated that the book is 'a perfect collection for people who have short attention spans...including myself.'

'A Dash of Flash' should appeal to anyone who enjoys short stories, or perhaps wants something to read during tea of coffee breaks, or while travelling on public transport. The book is an eclectic mix of genres, themes and characters. Many stories are thought-provoking and can be mulled over after reading, while some are a bit of fun. Still others take us away to a fantasy world for a while. All in all, I believe there is 'something for everyone'.