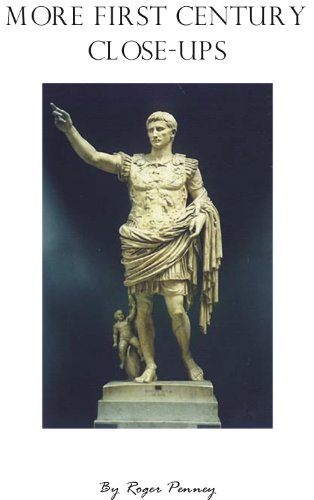 about this book: My first book, First Century Close-Ups, began with questions. This is a follow up to those questions since there were more incidents and more people who also were questions. Who were they really? Can I find out more from the text in the New Testament and will learned books on archaeology and the social life of the Middle East help me to get into the minds of those folk who lived two thousand years ago?

I cannot dogmatically assert that I have succeeded in this task. It is impossible to do. However I can make educated guesses and come up with a good story which may help readers to think themselves into the characters I have thought and written about. After all emapthy is the skill by which we do that, fit into someone elses shoes as it were, or ratheer into their brains.

Since we are given the skill of emapthy and since all these people were once, and still are, up there with the Lord Jesus, fully human. I too am fully human, well, I think so. Thus I can, to some small degree get into the way they may have thought.

I guess I learned a lot about first century Palestine. I gained some insighte into the teaching of the Bible and into the mind set of Priests, Pharisees, Zealots, Peasants, Fishermen, rich and poor, High and Low, A Roman Procurator and Roman soldiers and children playing. How cruel children often are.

It is a mental journey, my mind investigating the mental landscape of so long ago. Maybe my readers do not agree,maybe they see the same landscape differently, perhaps they will be delighted but all are invited to go on a journey with me, wherever it takes them.