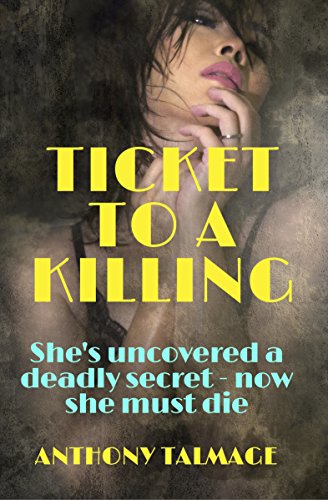 Book: Ticket to a Killing by Anthony Talmage

about this book: 'The scar on my left cheek itched. It always itched when I got excited. I double-checked the numbers for the umpteenth time. According to Venture there was only one winning ticket for this week's £17 million 'rollover' prize. And I was holding it…'

That's the opening paragraph of TICKET TO A KILLING, which introduces its lead character - a 28-year-old journalist, Emma Holgate, a warm, strong, independent woman who lives and works in London.

After conducting what seems a routine interview with an elderly woman, Emma discovers a serial murderer - dubbed by the media THE PHANTOM - is targeting lottery jackpot winners. The deeper Emma digs for her story, the more astonishing the conspiracies she uncovers, including a plot to undermine the world's stock markets.

Meanwhile, as Emma teams up with her newspaper colleague and best friend JJ to piece together the facts, a money-laundering angle is being looked into by a department of the NCA, the UK's equivalent of the FBI. The investigation's headed by Emma's ex-boyfriend, former Special Branch officer Nick Marlowe. Both pursue their own paths which entwine as they pursue the connection between The Phantom, media baron Hugo Pentecost and a plot to sabotage global financial markerts.

As author of TICKET TO A KILLING I aimed to create what used to be called a 'rollicking good read', a type of Boy's Own adventure which traditionally appealed more to men than women. However, from the reviews posted on both the US and UK Amazon sites, the vast majority of 5-star ratings are from women. It seems that Emma has captured their imaginations and they want more of her with her engaging line in self-deprecation and uninhibited attitude to sex.

Here are a few typical comments about Ticket to a Killing:

'gripping to the end', 'I clung on to Emma's every twist and turn', 'from moment I met Emma I was hooked', 'a roller coaster', 'couldn't put it down'