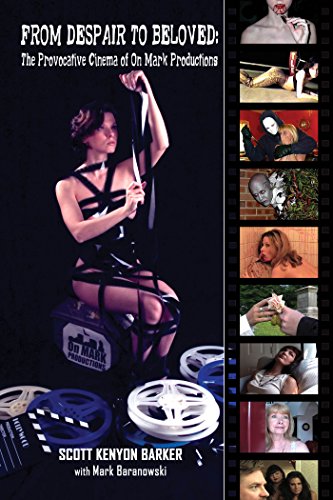 Book: From Despair to Beloved - The Provocative Cinema of On Mark Productions by Mark Baranowski

about this book: I love movies. In 2000, I decided I wanted to become a screenwriter. I pursued this endeavor for about a year, and even found a Hollywood manager to represent me. However, as the bills piled up and still no script sales, I grew desperate to get my work produced. With no filmmaking experience, I used what meager resources I had at my disposal and shot my first independent film, a short called DESPAIR.

Due to immediate distribution and numerous convention appearances to promote it, the film was a success, leading my wife (model-actress Ryli Morgan) and I to make several more films together over the next ten years.

This book provides not only a behind-the-scenes story of each one, but how they affected our personal lives and relationships along the way. It took those ten years for me to become disenchanted with making movies. Rather than tiredly repeating the process once more in 2014, I chose instead to co-author "From Despair to Beloved" with my good friend, longtime supporter and fellow filmmaker, Scott Kenyon Barker.

The six-month process wasn't an easy one. Both my grandfather and aunt passed away during that time, making it nearly impossible to focus on my contribution to the book, and led to my having a near breakdown. Through the tremendous support from friends and co-workers, though, I managed to escape this depression. With renewed spirit and determination, I completed the book in mid-January 2015, and less than seven months later, it was published by BearManor Media. I couldn't be prouder.

"From Despair to Beloved" was written for anyone else who loves movies, especially those with an interest in making their own. It's a cautionary tale (be careful what you wish for!), for adult readers...

Video: From Despair to Beloved - The Provocative Cinema of On Mark Productions by Mark Baranowski