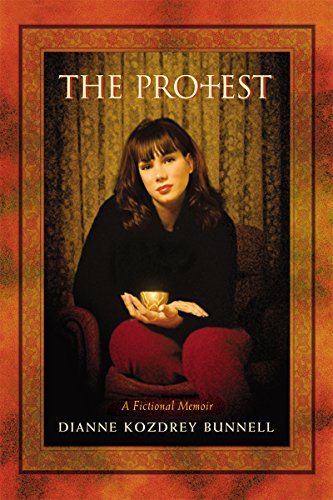 about this book: The Protest is a fictional memoir that took me ten years to write. The story is inspired by the real-life religious hijacking of my daughters, ages 10 and 12, who I am happily reunited with after almost a decade apart.

There's a story about the cover. I was not happy about the first version of my book's cover, and so was waiting in Starbuck's with my husband, about an hour early for a meeting with the cover designer. My husband said, "Look at that woman sitting over there. She's perfect for your cover; she's the right age, has the right hair, and, wow, she looks just like you! Why don't you go over and talk to her?" I shook my head and said I was too shy. But the more I looked at her, the more I worked up my courage. I finally went over to tell her about my book and ask if she would consider posing for my book's cover. She said she would...and also informed me that she was a professional model.

Here's The Protest's story: Janey Powers breaks away from her small town fundamentalist upbringing after being seduced by her minister and is building a new life for herself and her daughters in Washington. But her freedom has a price. She is being stalked by her former minister, Reverend Logan Churlick, mouthpiece of God. He will stop at nothing to possess Janey's heart and soul and will not hesitate to use her daughters to win her. After Churlick establishes paternity in court, Janey fights to protect her children. The girls become enmeshed in their battle, turning from innocent victims of a firebombing by the blood of the lamb into dangerous, scripture-spouting converts.

Janey faces the unthinkable as she puts into play a desperate strategy Churlick could not foresee - but will it save her girls or will she lose them forever?