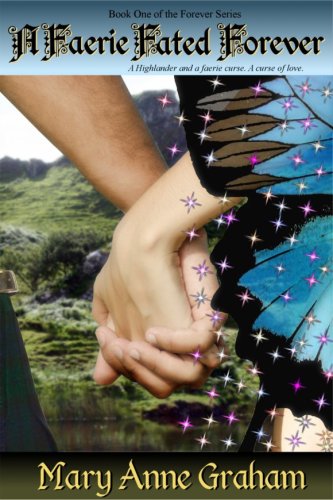 about this book: I wanted to write a book set in the Scottish Highlands. In searching the histories of various clans, I ran across a fascinating tale of the Clan MacLeod from the Isle of Skye. That clan owns a faerie flag. It seems a former laird was allowed a handfast marriage of a year and a day to a faerie princess. The King, the faerie's father, made her promise to return to Faerieland after that time. When she did, she left behind a husband and a son but later she returned and left a blanket bundled around her son to soothe him because he cried.

'Twas a fascinating story, but it left my muse wondering what might've happened if the faerie's laird later had to wed another in order to enrich the clan's coffers. And my muse created a whole tale with a fascinating cast of characters that has launched a whole series. I changed the MacLeod legend so I changed the Clan's name as well. The Clan is now the Maclees.

I'll bet the faerie and her father would have been quite irate. And an irate Faerie King might pronounce a curse. What if that curse provided that a faerie fated love awaits each laird. If a laird marries anyone else he faces a life of misery, temptation and torment. It also provides that each laird will be charming, handsome and chased by the lasses. So each must avoid dishonoring those lasses while resisting pressure to marry for duty -- and still await his faerie fated love.

Laird Nial Maclee now faces the choice, and he is being pressed to marry Heather MacIver, a dowdy lass who could never fire his passions. So Nial hatched a plot intended to convince Heather she couldn't trust him with her heart. That plot sent Heather fleeing to transform herself for launch on the marriage mart in London. Why hadn't Nial recalled that faeries sometimes make the impossible the inevitable?

Had Nial married for duty, he'd have discovered that once in the rarest of whiles, love and duty go hand in hand. Instead, he had to follow her to London and convince the woman he'd chased away that she was the only one who could complete his Faerie Fated Forever.