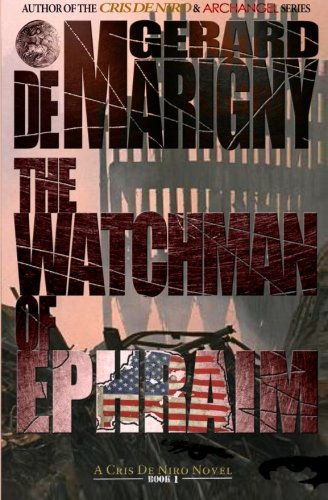 about this book: The Watchman of Ephraim is about a man's devotion to his faith, his wife, and his country. I was inspired to write The Watchman of Ephraim after a dear friend of mine, Danny Afflitto was murdered in the North Tower of the World Trade Center on 9/11. Writing it helped me deal with my feeling of utter helplessness. Cris De Niro does what I can't do, he protects people.

I create all of my own covers. The cover for The Watchman of Ephraim symbolizes the protagonist, Cris De Niro, with 9/11 on his mind. The eyes on the bottom symbolize him being "The Watchman" over innocent people who would be the target of terrorism.

The hardest part about writing The Watchman of Ephraim was Chapter 2, where I deal with the actual events inside the World Trade Center's Tower One after American Airlines Flight 11 crashed into it. It took me months of research to get every detail correct and as accurate as possible. I took the time primarily to honor the families and friends of the victims of the terrible day and because I believe the novel could also someday be considered a historic document. I did extensive research for the book, as I do for all of my novels. For The Watchman of Ephraim I researched 9/11, the U.S./Mexican border crisis, and Iranian-backed terrorism.

What I learned most from writing The Watchman of Ephraim is that it's okay to be a regular human being (not a superhero), a Judeo-Christian (without passing judgement on others, leaving that for God), and a good-looking, rich man that really loves his wife and remains devoted to her … all varieties of readers accept Cris De Niro and they like him and admire him.