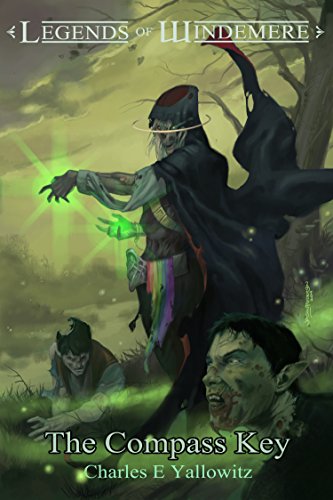 about this book: The fifth book of the Legends of Windemere is where several storylines come together in a powerful clash. There's a lot of action within these pages as Luke Callindor and the other champions lead an assault on the Lich's castle to rescue their captured ally. Facing the monsters of the Caster Swamp and the two armies under their enemy's control is only beginning of their newest adventure.

While the heroes are battling the Lich in the swamp, Trinity and the chaos elves have invaded the city of Gaia. Their mission is to claim a lost relic called the Compass Key, which has recently been sensed by the gods and the evil Baron Kernaghan. There are rumors that this item is vital to recovering Sari from the hidden island that she has been sent to before the effects of their enemy's tests kill her. It is up to Nyx to do her research while her friends do whatever they can to keep the chaos elves distracted and at bay. Yet, they will quickly learn that there their only choice is another pitched battle to free Gaia from the invaders.

Legends of Windemere: The Compass Key is an action-packed adventure that will show how much these heroes can endure before they snap. Will they last long enough to fend off an enemy that is more evil and powerful than anything they have ever faced before?