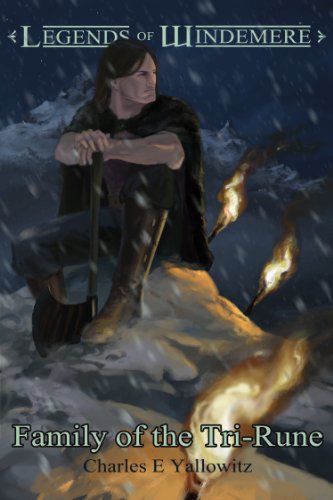 Book: Family of the Tri-Rune (Legends of Windemere Book 4) by Charles Yallowitz

about this book: This is the fourth book of the Legends of Windemere series, which retains the action, humor, and character driven drama of the previous installments. The story revolves around a past mistake of Nyx forcing our heroes to return to the disaster-plagued city of Hero's Gate.

In Legends of Windemere: Prodigy of Rainbow Tower, Nyx was nearly killed in Hero's Gate by a goblin swarm and survived by unleashing the devastating Genocide spell. She was left barely alive and struggling to regain her powers, totally unaware that the city was in equally bad shape. Thieves have taken over the shadows, goblins are stalking the forests, and a new breed of undead have emerged from the nearby swamp. The problems have become so bad that they have hired Tzefira and her mercenaries to protect the citizens. This scarred warrior has demanded Nyx be returned and fix the problems she caused. Our heroic caster is terrified to return, especially when she learns that the citizens of Hero's Gate blame her for everything and some even want her dead. The only thing keeping Nyx from getting lynched is the noble barbarian, Timoran Wrath, who very few people are willing to challenge.

Sari has her own headache with her relationship with Luke stalled. Asked by his absent fiancée to keep him company, the gypsy is becoming more and more frustrated with his distance. When an old friend returns with a plan to avenge their murdered clan, Sari must decide between the memories of her old life and the inevitable pain of the future.

Legends of Windemere: Family of the Tri-Rune will change the lives of every hero, but one will find their entire past has been built on a lie.