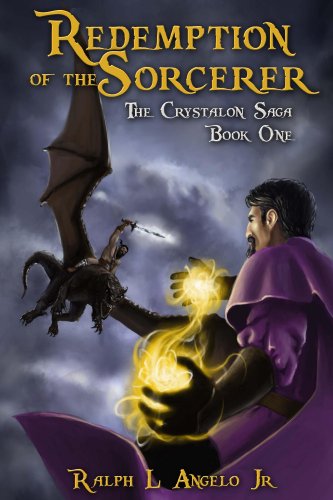 Book: Redemption of the Sorcerer, The Crystalon Saga, Book One by Ralph L. Angelo Jr.

about this book: Crystalon is a mighty immortal sorcerer and ruler of an entire universe who became callous and belligerant with his power. In a long standing plot, he is overthrown and exiled to a dimension seemingly without magic. Penniless and powerless he almost immediately becomes embroiled in a plot orchestrated by a hidden foe that would enslave the populace of this world.

With the odds stacked against him, with demonic fores and powerful evil sorcerer's allied against him,. Crystalon must traverse this world and re-discover the magic that once made him so feared, or more will be lost than just one world.

But will he feel he is ready to redeem himself and rise to the occasion, saving those in need? Or will he simply not care enough to try?

Redemption of the Sorcerer is is the story of a man's quest to save his own soul, as well as the soul of every other person on the planet. Along the way he and his companions will face all manner of magical evil. Yet if he does not defeat his hidden enemy, how can the people of this new world survive?

Video: Redemption of the Sorcerer by Ralph L. Angelo Jr.