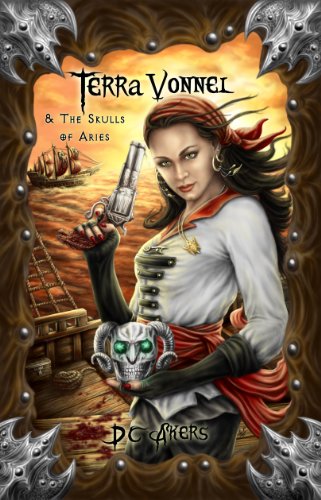 Book: Terra Vonnel and the Skulls of Aries by D.C. Akers

about this book: When seventeen-year-old Terra Vonnel, daughter of notorious pirate Bartholomew Roberts, embarks on a death-defying quest to uncover a hidden treasure that could turn back time, she unwittingly puts herself and her crew on a trajectory to disaster. Battling vampires will be the least of her worries should she reach the forgotten island known as Mount Aries.

Like many who enjoy the fantasy genre, Akers started reading it as an adolescent. He was fascinated with Tolkien's Lord of the Rings and Bram Stoker's Dracula. He currently enjoys reading works by Dean Koontz, Heather Brewer, J.K. Rowling, and Stephanie Meyer.

Akers enjoys creating characters and placing them on an adventure so thrilling that readers will never want to stop reading about them.

"My goal is always to bring readers to the edge of their seats with a gripping, fast-paced journey filled with the fantastic and the unexpected. People like to escape, and I want to give them some place amazing to escape to."

Akers believes that fantasy readers who enjoy strong female characters, vampires, pirates, and heroic battles set in a fantasy world will enjoy reading Terra Vonnel and the Skulls of Aries.