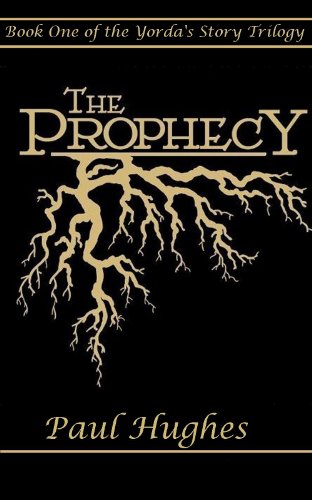 about this book: The Prophecy is a book in the fantasy genre and is based around a young man who, as he grows up, realises he has abilities that none of his contemporaries appear to have. The most noticeable is that he is a healer. As he comes of age he gets thrown into a world that is completely alien to him and suddenly he realises that he is much more than he originally thought. He is hunted down, with the intention of killing him, by a force that he does not realise is entwined with him. During this process he is introduced to creatures and people that he would never have believed could exist a short while earlier.

The basic premise of the story (which comes to a conclusion in book three), is that the world, where the story takes place, was created by a group of gods called the Helanth. These gods have also created many other worlds which they see as an experiment in life. To monitor what is happening on these worlds the Helanth create, for each world, a Spellweaver. This is a creature that lives outside of time and space who is given the task of monitoring and recording the events on each world. They also can 'nudge' things on the worlds to avoid what may be catastrophic events from happening. When the time comes the gods will return (book 3) and judge the worlds they have created after reading the recordings of the Spellweavers and decide if their experiment is allowed to continue unsupervised or whether the world shall be erased completely.

Yorda, basically, is a freak of nature as he is a young man that should not exist on this world (as will be made plain in book 2) although he does not know it yet. He gets pulled into an ancient prophecy that pits him against what may be the most evil creature on his world. The Prophecy states that when the two characters within the prophecy (of which Yorda is one) finally meet in a struggle that decides who will live and die, then the victor gains the power of the vanquished.

At one point in the book Yorda, and his arch nemesis to be, finds himself as a child in a schoolroom where he appears to be taught the secrets of things he has yet to find out. However, he has no memory of ever being in the school before and his fellow class mate is actually hundreds of years older than him so he could not have been there either – and yet they are.

The gods, when they created their worlds, also provided a way of moving between each of these worlds instantly. They are called Portals and can only be accessed by the gods themselves. The Spellweavers have a limited ability to use these portals but no human may do this. Unfortunately because of a mistake made by the gods (book 2) then the Portals are actually starting to break down and some of the power that is leaking from them can be used to a lesser or greater degree by the inhabitants of the worlds where they exist. The portals were not meant to be used by the creatures of each world for many years but it appears that this may soon change because of their advanced breakdown.

Yorda has to go from a young man, who is a healer, to an adult, with the power to change the destiny of his world, in a very short time. At no time in the book is it certain that the path Yorda takes is the correct one as his power, ultimately, may not be able to be controlled by him.

Although book one finishes with Yorda appearing to have succeeded (as the book obviously must) it leaves the reader wondering what will come next as many questions posed during 'The Prophecy' are left unanswered. The ancient prophecy spoken of in the book may not actually have been interpreted as precisely as the characters within the book thought and this leads us into book 2.

After a serious illness I was unable to work or to walk. I was hoping to find a healer of some sort that could actually help me recover and I created an image of someone who could heal without any surgery and someone who had an affinity with animals and also had amazing physical abilities. This came about as a sort of fantasy me. I used to be world number 2 in my category at squash and am a physiologist and nutritionist.

While I was ill I was listening to an album by Enya and images started to coalesce in my head that went hand in hand with my imaginary healer. Putting the two together gave me an idea for a book.

I started to write and soon found that I had too large a story for just one book and so the trilogy 'Yorda's Story' was created.

To create a completely new type of book is rare indeed, in my opinion, and so writers strive to put a twist on something that has already been touched upon.

I believe I have done this in the world created in 'The Prophecy'. There are no super heroes, no ultimate magic that rescues people in the direst circumstances, no sudden appearance of a way to escape danger that has not been touched on before, but instead I have created something that people can aspire to reach themselves even if it is always slightly out of their grasp. The fact that it occurs on a world not unlike our own pulls the reader into the book and lets them marvel at a different reality.

Here are some of the many lovely reviews I have received:

• "The Prophecy was utterly brilliant...the best book I have ever read in my life! Normally when I read a book my mind wanders off whilst reading so I miss bits of the story but with The Prophecy my mind didn't wander at all because it was sooooooooo exciting."

• "A good read and an interesting story that develops well over the series. Paul Hughes creates a believable new world, reminiscent of how Tolkien created a world that is recognisable but wonderfully different from our own."

• "Thoroughly enjoyed this book. Read it from back to front in 1 day of sunbathing on holiday, really hard to drag myself away from it. Will definitely be ordering the next two."

• "You'll love this story. From the first page you'll find yourself immersed in an adventure that you just can't leave until the end."

• "Just finished last half of the book in one session - couldn't put it down. This isn't my normal subject matter (or hasn't been since school) but I just loved it! When is the sequel published?"

• "I could not put it down and I did not want it to end. I fell in love with the Characters. I will be reading the next book."