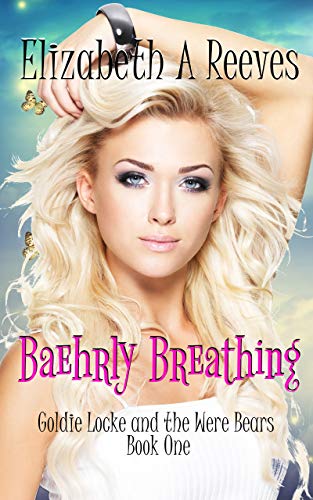 Book: Baehrly Breathing (Goldie Locke and the Were Bears #1) by Elizabeth A Reeves

about this book: Goldie Locke is sassy, smart, and cute, but don't tell her that! All her life she has been fighting the stigma of being so cute that no one takes her seriously. With two PH.Ds and a law degree, you'd think she could get a little respect.

And she takes herself very seriously, indeed.

Goldie's life is dedicated to the rescue and preservation of endangered Magical creatures-- carrying on the work of her father who was murdered by poachers when she was sixteen years old. Goldie is willing to do anything to save these unprotected beings, even work side-by-side with an Ordinary detective that doesn't even believe in Magic.

But things take a quick turn for the worse when the poaching investigations turns into a murder case, dumping both Goldie and her Ordinary partner face-to-face with a dangerous killer who will stop at nothing to accomplish his goals.

Readers of the Cindy Eller series will enjoy this new insight into the Magical world through the eyes of her feisty younger sister. Featuring such creatures as a zombie rooster, a baby dragon, and a miniature pink mastodon, this book is full of laughs and action.