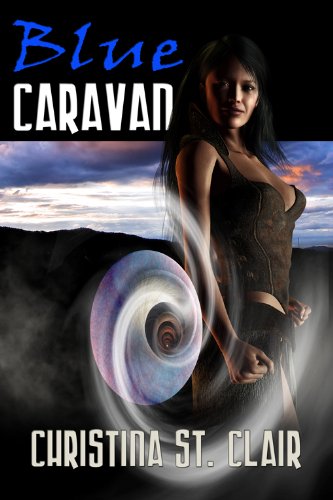 about this book: Blue Caravan is a supernatural fantasy for teens and anyone interested in Arthurian folklore, Merlin, evil, and 1950s England. It is a sequel to Emily's Shadow but is a stand-alone read. It took a lot of research, something I love to do. Blackheath, London, where the story takes place was said to be where plague victims were once buried in mass graves. This turned out to be untrue, but when I walked across that barren grassland, I could feel strangeness begging to become a story…

Bernard Moses, a philandering gypsy, picks up a shining pebble from a beach in Cornwall, not knowing what it contains. An evil sorceress, Vivienne, is trapped in the pebble, banished there by Merlin, who she once tried to destroy. Bernard drills a hole for a chain and the pebble gives off heat. He believes this is a talisman and wears it around his neck. When he drives his splendid blue caravan to Blackheath, Emily, who lives nearby, sees him and wants a life as free as his seems. She little knows Vivienne is nearby and nightmares and visions are about to begin again, ones she thought long past.