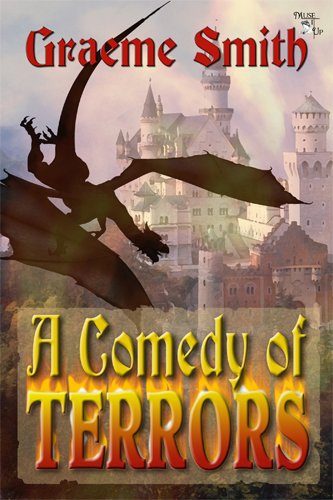 Book: A Comedy of Terrors by Graeme Smith

about this book: Today I was exiled for life.
Twice.

Apparently I'd been dancing with the Emissary from Targis. It hadn't been the dancing. Apparently I'd worn red shoes. Only an idiot would wear red shoes to dance with a Targisian. Red shoes are the mark of their Assassins' Guild. So in Targis it's a point of honour to let people in red shoes kill you.

While I was dancing with the Emissary I was also running down the corridor of the castle with a message for the Queen's First Minister. Apparently I'd tripped and fallen, knocking over a four hundred-year-old vase. It was a gift from First Fist Andrakan of the Eldrak Horde. What else could it be except, exile-for-life?

Of course, I wasn't in either of these places. Well, I was, professionally speaking. Not in person. But that's my job. The Idiot Who Did It. For any value of 'It'. So I was exiled-twice. It helps to have a key to the backdoor.

Another day in the life of Segorian Anderson – Court Idiot. In a Queen's castle, wine spilled down the wrong jerkin can lead to war. So someone has to be blamed. Someone unimportant. Someone no one will notice or care about. And Segorian's fine with that. It's a well paying job, with no heavy lifting.

Something only an Idiot would take on.
And now Peladon has a bad case of dragon.

But if Segorian thinks the dragon is going to be the hard part, he doesn't know the half of it. Because even if he's the only person in the castle who doesn't know it - Segorian has woman trouble. And to Segorian women are an open book. The problem is - he never learned to read.

Video: A Comedy of Terrors by Graeme Smith