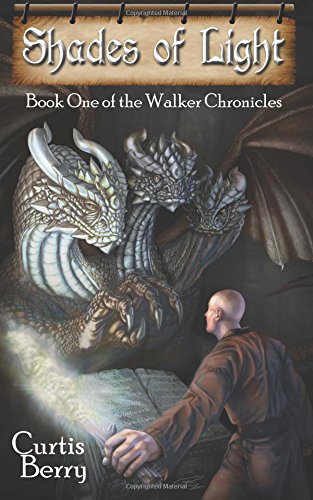 Book: Shades of Light - Book One of the Walker Chronicles by Curtis Berry

about this book: Shades of Light is the beginning of a trilogy in a series of trilogies spotlighting a young monk named Torin, who is a member of an order of monks. Torin and his brethren were all left anonymously at the monastery as infants by those would could not or would not have them.

Torin is on the edge of adulthood, where a monk communes with his god during what is called a "trial." If deemed worthy, the inside of Torin's right forearm will be branded with the white eye of the three-faced god Gharan-Dis. At that moment, Torin will become a Walker of the Light and strike out into the world to learn everything he can about the concept of good.

In this installment, Torin is a month away from his moment. Within days, however, someone he cares for deeply will be attending her trial. Her name is Loraia and Torin wants nothing more than to be with her as she explores the world. But the only love that a monk should have is for his god. Loraia has made it clear to Torin that she doesn't want him with her because she knows Torin's feelings will complicate things for them both.

Undaunted, Torin is determined to win Loraia over. What he does to achieve his goal will set events into motion that will take the young monk on a perilous journey that may very well destroy his faith and change him forever.

• What inspired me to write this book?
As a kid, I fell in love with the Kung Fu series with David Carradine and have always been fascinated with martial arts. I wanted a young adult protagonist who moves from obscurity to legend through the story or series.

• Who are the primary readers of your book?
This is a series that can be enjoyed by anyone interested in fantasy fiction containing magic, wizards, dragons, elves, etc.--a Tolkein-esque setting.

• How long did it take to write it?
I've been playing around the idea for over 15 years. The actual writing process took over a year.

• How did you come up with the title?
Good question. Torin's goal is to become a Walker of the Light, which is a monk who explores the good in the world. Throughout the book, Torin questions his faith his god, which takes away the clarity of his goal of the "light," hence the "shades."

• Why did you choose the cover?
I wanted a scene from the book that was an eye-catcher. Torin's moment in the underground temple with the three-headed dragon statue of Gharan-Dis is powerful and hopefully entices the reader to want to know more about it.

• What was the hardest part of writing your book?
Aside from the obvious answer of "sitting down and getting it done," the hardest part was logistics of planning it out. Deciding on the goals of the story and the characters in it, creating engaging secondary characters and villans, and weaving a tale with multiple facets that kept the reader interested and guessing. Trying to keep in mind what would be plausible to the reader was always tough, even in a fantasy atmosphere where a writer can create anything he or she wants. Lots of work.

• Did you do research for your book?
Yes. When creating a group of monks based loosely on the Shao-Lin, I had to read a lot and take notes to be sure I was consistent in what I presented to the reader, who can be sharp-eyed when spotting mistakes and inconsistencies. I also had to be conscious because my world is utilizes a roughly medieval setting.

• Did you learn anything from writing your book and what was it?
I learned that writing is more than just understanding grammer. It involves a great deal of vision, an understanding of human emotions and needs, a grasp of dialogue and scene description, and much more. As I wrote this book, I really developed an appreciation for writers who have created stories that have drawn such a devoted following. Creating a rich world with engaging characters and a believable story is quite an accomplishment.

• What do you want to say to your readers?
Enjoy the story, the characters, the world, the concept. If the story causes you to forget about your own mundane world while you're exploring mine, then I've done what I set out to do.