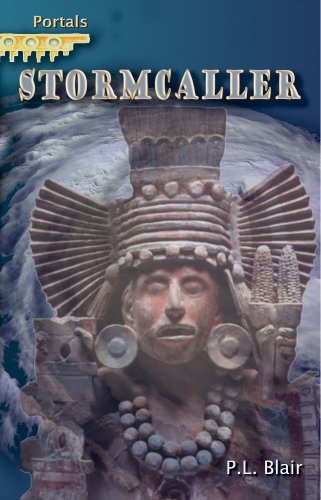 about this book: Tlaloc, a creature worshiped by the Aztecs as a god of storms and virulent diseases, returns to modern-day Corpus Christi, Texas, with a single demand: Restore his worship as in the past – complete with human sacrifice – or he will send a megastorm to destroy the Texas coast.

Corpus Christi police detective Kat Morales and her elf partner Tevis discover that, to stop an ancient god, they have to defeat him on his own turf ...

Stormcaller is Book 2 in my Portals fantasy/detective series, a series set in a not-too-distant future in which gateways (the "Portals") have opened between our human world and the Realms of Magic wherein dwell all the beings – elves, wizards, dragons (and ancient gods) – that we humans have long dismissed as myth and fantasy.

Kat, Tevis and their allies including two wizards and a chaotic djinn solve crimes that result when magic is misued.

I got the idea for the series because, as a longtime student of mythology and folklore, I've discovered that there are patterns in our tales. Nearly every culture has stories of dragons or dragon-like creatures, tales of elves or faeries, magic-wielding wizards or sorcerers …

The "detective" side of the series comes from my second-favorite genre – and a fascination with forensic science. I started out with the concept of a CSI-type series in which a continuing cast of characters would solve crimes based on forensic evidence.

Then it turned out that Tevis can See how someone died just by laying his hands on the victim, and that kind of rewrote everything.

My books feature a continuing cast of characters, but the plots are self-contained. You don't have to read the prior books in order to "get" what's happening in the one you're reading.