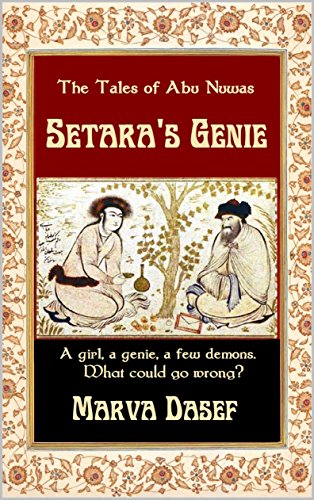 about this book: Setara is bored. Living inside the walls of her father's desert compound, she longs to get out into the world, to have adventures, maybe find romance. But her father won't let her go anywhere in fear she'll be captured by the mountain raiders.

Sneaking outside the walls proves her father's fears. Setara is kidnapped and hauled into the mountains. She suddenly feels like the adventure she sought was not all she thought it would be. Even worse, the raiders don't intend to ransom her. They need another sacrifice to placate the mountain demon and put her on the monster's menu.

The demon turns out to be a genie! All her prayers answered she believes, until she gets to know Basit the Djinn a little more. He's not a hand-out-wishes kind of genie, but believes it his duty to teach the naive girl how to think and get herself out of trouble. Yes, he'll apply a bit of magic, but only under dire circumstances.

Together, Setara and her genie have many adventures, making magical friends while fighting horse thieves, real demons, pirates, and other creatures of myth. Follow Setara and Basit while she turns from pampered rich girl into a strong woman who decides her own fate.

• "Fantasy mixed with a modern style of Arabian Nights style stories bring a blend of intrigue and adventure which made me eager to continue reading." — Sue Perkins

• "The tales are wonderfully adventurous with characters well drawn. I recommend this book as a whole family enjoyment type." — Lorrie Unites-Struiff