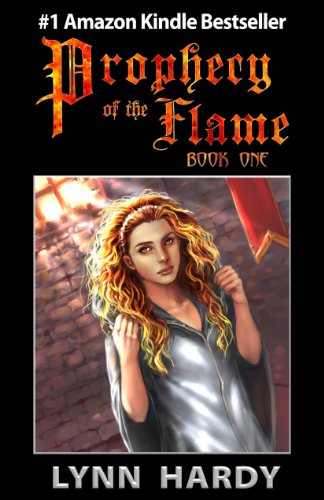 Book Review: Prophecy of the Flame by Lynn Hardy

about this book: "I found myself staying up till 2am in the morning on a work night to finish the book." ~ Trudy Steele

"The story picks up speed and whisks you away to another realm." ~ Kimberli Reynolds

"I thought I'd have to deal with sci-fi and much worst gaming: but, to my regret, after a month when I continued reading, I find this as exciting as a roller coater ride" ~ Avery

Rebecca is an ordinary house wife, trying desperately to save a troubled marriage. When her husband books a stay at the Renaissance Hotel and Gaming world for their anniversary weekend, she doesn't have the heart to tell him that playing video games is not even close to Live Action Role Playing with D & D characters. In a flash of light and a thundering clamor, Rebecca and the group of gamers are transported into a magical world and changed into the characters they were pretending to be.

This band of wannabe heroes soon discovers that having the powers they have always wanted, doesn't make life a dream come true. The Crusaders of Light fight to free the kingdom of Cuthburan from an evil horde, so that they can return to Earth and the loved ones they left behind.

Rebecca, transformed into the Archmage Reba, wages another war. Drawn against her will to the arms of Prince Alexandros, Reba must choose between the prophesied marriage to a handsome prince in a magical world or returning to the husband she left behind.

Inquiries have been made - a screenplay has been finished - Will this book make it to the Big Screen?

Up until 2 am on a work night, just to finish this awesome book!

A great introduction into the world of fantasy. The story focuses on a group taking part in a role playing activity. They are suddenly transported to another dimension. A wizard in that world called for them to help protect his kingdom from the demons who are attacking. It turns out that there is a prophecy that was tailor made for the female Mage named Reba.

Reba and her fellow crusaders have to learn quickly how to survive in a world unlike their own. It gives the reader a look into how people would act if they knew they would never see the people around them again. Throughout the story you find out that the demons were brought from another world: there's a Wizard who wants to control the entire planet.

This is the first book that I have read that deals with roll playing, it didn't play a major part in the story line, so it didn't distract from the plot.

It was written in the first person and was done well. It read at a nice pace and you found yourself sucked in to the story. I liked the fact that it focused on the honor of the characters and that they looked at the consequences of their actions.

I found myself staying up till 2am in the morning on a work night to finish the book. I would recommend it to anyone that likes fantasy and action. If you are new to this genre it does a good job explaining the rules of magic and war. I am looking forward to the second installment in the book to see where the characters end up. [by Trudy]