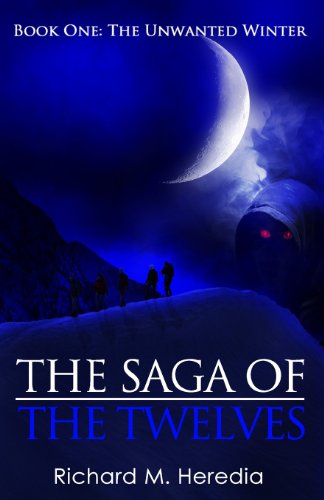 Book: The Unwanted Winter (The Saga of the Twelves) (Volume 1) by Richard M. Heredia

about this book: Many folks have been inquiring as to what the Snowman Series is about and for the most part, I sort of struggle with the explanantion, because of the size and scope of the plot. So, I decided to break it down in detail for anyone who might be interested and maybe this will help me become more concise when I try to verbalize what this story is trying to say.

• The Theme
The theme of this tale is grounded in two parts that together gave me the idea for the story. The first, came during winter break in 1988 when I was watching my younger cousins play together. I could see the love they had for each other, even though they were only five or six or seven years old, and a thought came to me, "How young are we really when we begin to establish bonds that we ae willing to fight for, maybe even die in order to preserve? "

That stayed buried within me for a year until one day, on the way to work, my cassette tape of Christmas carols got stuck while I was listening to "Frosty the Snowman", but continued to play the music. What I heard scared the crap out of me. Played slow and slightly distorted that song eschews entirely out of context and is SCARY. Frosty sounds sort of wicked and mischievious. That was when the two parts came together and I had a story. What if the Snowman was ancient? What if HE was the real menace behind evil on earth, preceeding everything, only no one knows this? And, what if he wanted to come back and only children stood in his way, had the capacity to unset his schemes of domination and slavery?

I was in the university library the next day, doing research...

• The Setting
The story is set in modern day Los Angeles, specifically in the neighborhoods of Highland Park and Eagle Rock, and in a fledgling world that should not exist.

• The Plot
For more years than history can account the Twelve, a group of normal children ages 17 or less, have always stood between mankind and the terrible, age-old menace that is the Snowman, the Great Maelstrom. Time and time again, the Twelve have thwarted the plans of the Lord of the Storm and his countless minions until now.

Since the "rules" that have kept the three universes apart for millennia cannot be changed or ignored by any means possible, the Snowman has devised a way to circumvent them. He and his many followers have constructed a fourth universe - the Melded World, which is an amalgam of our universe, the World of Man and his, the World of Storm. With the casting of the final spell of completion, the Twelve are suddenly torn from their homes, their families, their friends - everything they hold dear, and are thrust into the Melded World, where Logic, Science and Technology do not hold sway over Sorcery and Gifts of the Mind. They must find a way to survive. They must face horrific enemies. They must forge lifelong bonds of friendship or they will all surely perish.

If that were to happen, then the World of Man would be laid wide open for the taking. The Snowman would come to earth and destroy our civilization, and place it under his iron shod boot.

That my friends is the Snowman Series, a huge tale that will one day involve over a hundred characters: some good, some bad, a few saintly, but many more diabolic. It is a story that has been waiting to be properly told for more than 23 years. Thanks to the urgings of my children and the enthusiasm of my cousins, I finally got courageous enough to write it.

Now, I want to share it with the world!