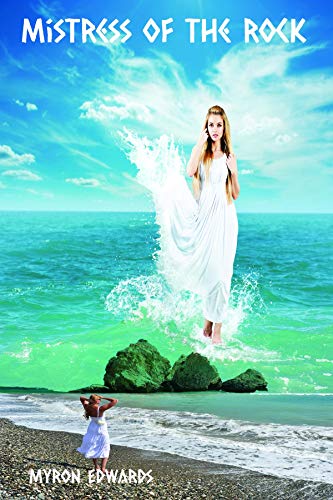 Book Review: Mistress of the Rock by Myron Edwards

about this book: 'The TV programme 'Fact or Fake' investigates unique phenomenons, that sometimes stretch the imagination of the viewer. More over many of the so called sightings are tested and put down as fake pure and simple. That cannot be said about the phenomenon that exists today in the waters of the Mediterranean on the island of love, the birthplace of the goddess Aphrodite, for this unique offering is about faith, pure and simple you either see it and believe it, or you don't.

It is the catalyst in the book 'Mistress of the Rock' which is due to be launched at BEA in New York this coming May 31st. Writtten by Myron Edwards 64 an ex pat living on the island for some 11 years, it tells the story of ex British soldier Richard Cole whose experiences in the Gulf War of 1991 plunge him into a battle between what is real and what Is fantasy. Haunted by the images of war, his mind looks to find reason but all he finds is a mystery, one that he knows he must uncover one day to find the answers.

These answers begin to come together when he and his wife Julie a one-time ex Bostonian travel to Cyprus for a well-earned vacation, unbeknown to them that fate will deal the cards that will set them both on separate paths.

Meeting up with Richard's former helicopter pilot pal Peter Shaw who now lives with his wife Sheila on the island as expats, Peter invites Richard and Julie to take a ride in his borrowed helicopter. Reluctantly Richard tags along, for he fears that this journey will once again ignite his troubled mind. But in fact, the opposite happens and the answers that Richard has long been searching for now begin to unravel and a mystery that remained hidden is now discovered, which starts a plethora of events, some which Richard may not be able to control and putting him and Julie on a collision course, with forces unknown and unrelenting. Culminating in a climax of choice between what is real and what is fantasy.

If you still have doubts take a long, long, look in the waters of Petra Tou Romiou and tell us what you see? Go on look deeper, deeper, deeper!

Mistress of the Rock is in two words, a "must read."

A captivating story reminiscent of a modern-day fairytale, it had me hooked from page one till the very end.

It delivers without fail, a great tale masterfully written by a true connoisseur of words, with the outmost respect towards the local legends and traditions that inspired its inception.

Even though it does not get all the historical facts correctly (an issue which is remedied in the Greek translation) the book is by far one of the greatest reads I've had in several years.

Every page is a journey, every chapter is an experience.

The simple yet beautifully crafted style makes it easy for the reader to suspend his disbelief, and it mixes just the right amounts of fantasy and reality to make the story relatable.

In my personal opinion, the story explores hidden facets that deal with the way love is perceived, through the eyes of a compelling main character, who even though portrayed in an unbiased light still manages to capture your sympathy.

I would recommend this book with out any hesitation. [by Mario Plousiou]

Video: Mistress of the Rock by Myron Edwards