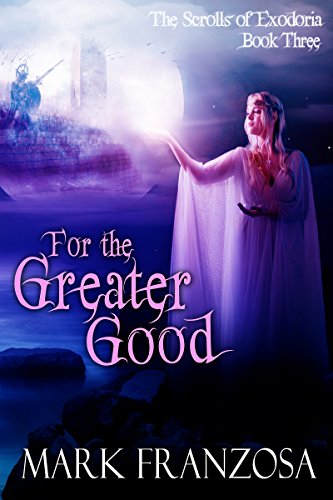 Book: For the Greater Good (The Scrolls of Exodoria Book 3) by Mark Franzosa

about this book: 'Darkness Falling' followed Sart and Selene on their journey to becoming almost gods. 'When Dragons Die' followed Kit as he was unwillingly thrust into the spotlight as the fight against Sart and Selene heats up and engulfs the world.

'For The Greater Good', the just released final book in the series, tells the tale of the final battle between the Selart Empire and the allied races of the west.

After the battle at Azure Bay, Kit is forced into a leadership role he is unprepared for. His city is destroyed, orcs and other dangerous creatures prowl the continent, and he has no idea where the last artifact he must protect is even located. It's up to Kit to unite the land and lead a last ditch effort to destroy the Selart Empire once and for all.

The question for readers is this: do you back Sart and Selene, with their unimaginable magic, orc army, and thirst for power? Would they keep the peace if they got that power as they claim they would? Is peace with an all powerful being that could obliterate you in the blink of an eye even possible?

Do you back Kit and his alliance of human, fae, elves, dragons, and dwarves? Can they put aside their differences to unite against a common foe? Can they even hope to win against impossible odds?

Find out what happens in 'For The Greater Good' the thrilling conclusion to the Scrolls of Exodoria series.