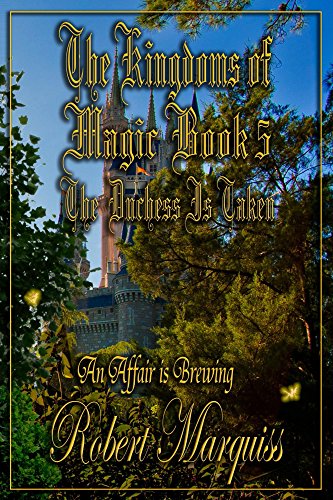 Book: The Kingdoms of Magic Book 5 - The Duchess Is Taken by Robert Marquiss

about this book: Having repelled the first sea raid on her Island of Nor and collapsed from fatal poisoning from an attacker's spear, Queen Elise wakes up in her bed in the Fairy Palace next to Doctor Madison, the Pirates' chief surgeon, who was also fatally wounded. While she was shocked to find a man in her bed, she finds him very attractive. Daleana tells her he had found a cure and saved her, but didn't get the treatment in time. As he passes out, Elise cries over losing a new friend and savior – and her tear revives him. Back on the shore, hundreds of attackers are trapped between hungry Sirens in the water and unscalable cliffs. When King Shadak of the underworld finds out, he orders new tunnels dug to rescue them. Meanwhile, he has sent the Chief of his armies, Commander Rank to bring him Duchess Dielos, the daughter of the old king, with plans to use her as a puppet ruler above ground. And so the saga continues.