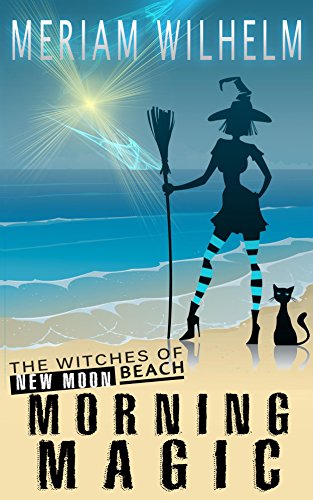 about this book: I've had a life time fascination with witchcraft and often wondered what it would be like to live in a family where witchcraft was practiced. So after doing some research, even taking a few field trips and reading the works of several other authors, I decided to create my own family of witches. And where better for them to live than at the beach, where I live!

Morning Magic is the first in a four part series entitled The Witches Of New Moon Beach.

New Moon Beach is a quaint beach city and home to the Merriman family who have three sisters who all practice witchcraft - one way or another. Add in a father who's a controlling and cold witch and a mother who mysteriously disappeared long ago and you've got one hectic home life.

When youngest sister Olivia, returns home from college to open Mystique Creations, her own sewing and crafting shop, the city is in for some big changes. While Olivia's sister the Mayor is working hard to grow and develop their little beach city, unfortunately Mystique Creations sits right in the middle of land that a developer want to turn into a big fancy hotel. Tempers fly when Olivia learns not only of her sister's involvement but also that it's the father of her on-again/off-again boyfriend who is driving the hotel development.

Will family ties or city politics win out? And what about Olivia's boyfriend Jonathan, will she have to sacrifice her love for him to keep her shop or will he choose Olivia over his father?

Visiting ghosts, disagreeing witches, a demanding cat and spells that go any which way but right, put the city of New Moon Beach in danger of being destroyed and keep all of its residents on edge.

Will the Merriman family be able to pull together and set it all right or will their involvement actually make matters worse?

I hope you liked meeting the Merriman's and enjoy their struggles within the little beach town of New Moon Beach.