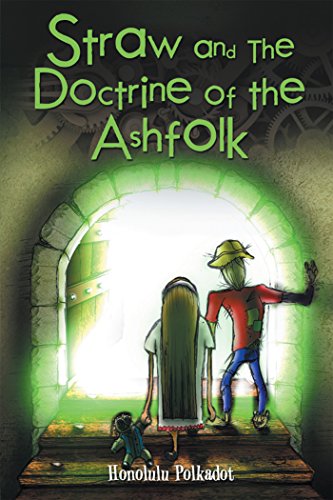 Book: Straw and the Doctrine of the Ashfolk by Honolulu Polkadot

about this book: New book tells story of 'Straw and the Doctrine of the Ashfolk'

FORNEY, Texas – The somewhat mysterious Honolulu Polkadot unveils to readers a captivating tale of courage and acceptance in "Straw and the Doctrine of the Ashfolk" (published by Trafford Publishing). The unforgettable adventures in this book allow readers to see how a young scarecrow faces his fears to fulfill his destiny.

The young Scarecrow, Straw Stickpost finds himself frightened and in the middle of a ferocious Ashfolk raid. To save his people from a most horrible fate, Straw must set out on a journey to the Chasm. Along the way, Straw meets companions who help him in his mission. Straw discovers a deeper cause in his journey and he is called by a higher power to accomplish a great task. Can he succeed?

Set in The Field where Straw and the Scarecrow people live, the book spans across a wild strange land full of strange people, steam-powered beasts, Skabb pirates and other unexpected oddities. Through the remarkable and well-drawn characters, readers will learn all about courage, unwavering faith in God and the power to change for the better. It offers a real adventure with a purpose.

An excerpt from the book:
Klay's hulking silhouette swayed across the exterior of an unimpressive thatched- roof hut. His body was carved from a slab of red clay. It appeared that a mad-minded potter had thrown him together on a psychopathic whim. He was the warrior chieftain of the Ashfolk, the leader who now led them to command a most certain victory over the persecuted Scarecrow people.

"Straw and the Doctrine of the Ashfolk"

Available at Amazon and Barnes & Noble

About the Author
Little is known about the reclusive author, but what is known is this: Honolulu Polkadot, contrary to popular belief, was not born in Hawaii at all, but rather in a small town in Texas. The town was prone to attacks from the occasional appearance of marauding pirates and infestations of giant crop rats. A statue of Honolulu Polkadot was erected early last summer with a plaque that reads: "Honolulu Polkadot, inventor of the electric nose-picker, and beloved candle-stick maker." Polkadot has chosen to spend his time away from the attention that his popular books have spawned, and he now spends his days quietly writing stories for all to enjoy.

Video: Straw and the Doctrine of the Ashfolk by Honolulu Polkadot