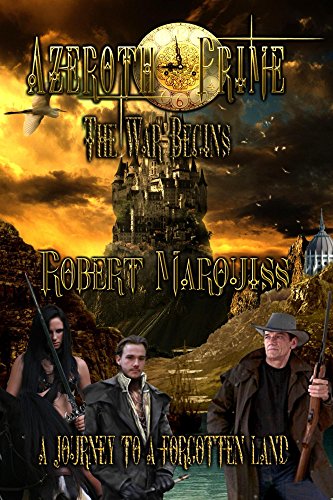 about this book: Professor Williams, A History of Science Professor, was looking over a Pirate's log book that one of his students had given him as part of his report. Upon studying it he noticed something very peculiar about the book and some of its pages. He went to the science lab to check out the book. After testing the log book with different chemicals He discovered the pirate captain had hidden the description of a lost civilization and how to find it with in the pages of the book. Astounded by this discovery, he wanted to find this magical kingdom himself.

Professor Williams had no clue he was about to find Azeroth Prime, a hidden medieval civilization in great turmoil. Brewing outside the walls of its capital city is an evil force unlike any other. This treacherous army has intentions of laying waste to the last bastion of goodness, honor and peace in the kingdom. Like a shadow of a hawk looming over its prey, the army will advance with frightening mystical powers to begin its devastation.

It's a race against time to see who wins.