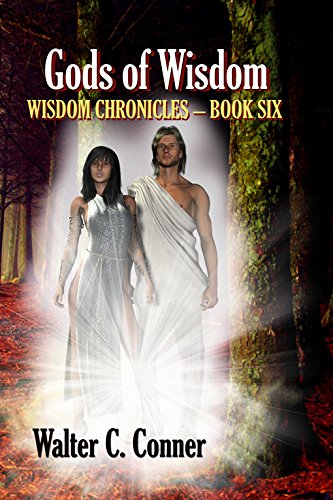 about this book: "Gods of Wisdom" picks up where "Heirs of Wisdom" (Book Five) left off following the coronation of Ryan, the successor of Alexander who had founded the Kingdom of Wisdom more than sixty-five years earlier.

Though the basics of the magical systems and the evolution of the characters remain intact, in a departure from the more traditional sword and sorcery model of the other books in the Wisdom Chronicles series, the future of the kingdom is threatened by a magical force that leaps to Wisdom through a portal created by a malevolent shaman from an alien world and earlier time who is bent on increasing his power and dominion over all life.

The final book in the Wisdom Chronicles series will be Book Seven, "Origin of Wisdom ~ a Prequel" which will most likely be published sometime in 2017.

When I began writing Book One of this series, ("Wizard of Wisdom"), my goal was to write fantasy stories aimed at more mature readers, i.e. from slightly more sophisticated young adults up. My readers have told me that I have succeeded.