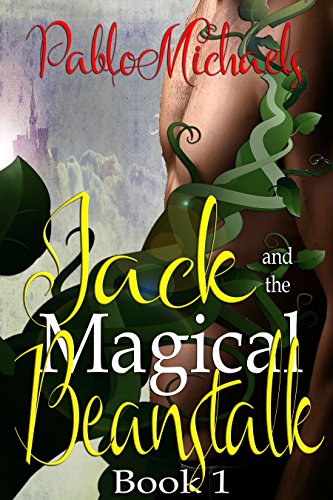 about this book: Pablo based his version of Jack and the Magical Beanstalk on the fairy tale classic, Jack and the Beanstalk. He wrote depicting young, awkward Jack as a gay teenager, pursuing dreams. Pablo added new characters. There are two giants, Master and Slave, as two giants eating young, handsome wimps, like Jack and the naked men who also inhabit the land where the magical beanstalk led Jack. One of these naked men, Sam, became Jack's love interest. Sam stole from the giants and met his lifetime soulmate in the land up in the sky. Jack is a story of a young man realizing his manhood, growing from an awkward, bullied teenager to a strong man, like his father, who believes in dreams. I wrote this story with gay men who might identify with Jack as a coming of age character.

As a poor, widowed mother, Lorene, raised her scrawny, young son, enduring hardships. Jack sold their prized cow, Pearly White, during a drought on their farm. Jack traded Pearly White to a strange, nearly naked old man for five magical beans. Despite his mother's disbelief in the magic of the beans, Jack woke up in the morning, finding a giant beanstalk growing outside his bedroom window. Climbing up the magical, sensuous stem, he found another world with a giant castle, inhabited by two giants, Master and Slave. Jack hid from Master who feasts on young, handsome wimps, like Jack. After Master fell asleep, Jack stole Master's bag of gold coins, fleeing toward the beanstalk. Before he slid down the beanstalk, Jack noticed a handsome, naked man, his size, who stared back at him. Their eyes were locked in a gaze, of recognition, until they heard the thumping of Giant and Slave's pursuit. They both flee. With the new gold coins, Jack saved the farm and hired two men to work as farmhands, Zeke and Adam. Jack climbed the beanstalk, again, meeting the naked man, Sam, while stealing a chicken that lays gold eggs. But with the giants hunting Jack with the chicken, the young man escaped with Sam's help, ultimately descending the beanstalk, again, only to be left with hunger pains of love. The farm prospered. Jack was pursued in love by the two farmhands and other young men. But Jack was drawn to pursue Sam, again and tempt stealing more wealth from Master and Slave. Do Jack and Sam survive the wrath of the two giants and consummate their love, when Jack steals a gold harp, singing out, "Master! Master! Master!" in panic? When Sam led Jack into the forest, he revealed a legend concerning the harp, a myth regarding loyalty and love. A questions is posed. Will Jack stay and live with Sam? Or does Sam who is afraid of heights, descend the magical beanstalk to live on the farm with Jack? The immediate dilemma, escaping Master and Slave, had to be resolved.

Video: Jack and The Magical Beanstalk - Pablo Michael’s has created a magical journey into the world of fairy tales