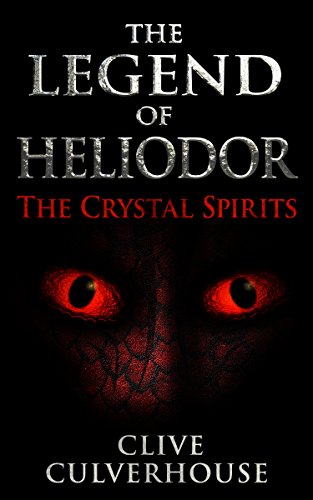 Book: The Legend Of Heliodor - The Crystal Spirits by Clive Culverhouse

about this book: The Legend Of Heliodor: The Crystal Spirits was originally written for my two children to have something to read. Because of that it is aimed at older children and teens. It is very much about the value we place in the earth around and the very rocks beneath our feet. This comes from a lifelong interest in rocks and crystals after being given a Tiger's Eye quartz by a friend at school. Its patterning and effects were amazing and I was captivated by this treasure of the earth.

Believing quartz and other crystals contain powers of knowledge and magic, not just by me but by people in general, it seemed a logical idea to write my book about spirits or people actually residing inside the crystals themselves. This then led to the main basis of the story where two crystals owned by the King contained spirits and they guided him and his reign. The Legend Of Heliodor known throughout the land tells of this and what happens, leading to an exciting adventure.

One thing that some readers might pick up on is that although the book contains crystals and gemstones, I don't call them by their name; instead I decided to call the characters by the crystal, rock and gemstone name so the main character Kyan comes from Kyanite for example. The spiritual properties of the minerals can also be seen in the characters too. Except for the name of the dragon. The dragon's name is from the constellation Draco and it's from the star that forms the Eye in the constellation.

I've had quite a few comments about the cover and how cool it looks. I gave my cover designer a brief and an idea of what I wanted but actually I was quite vague. He then came up with something and sent me a rough draft of the cover and as soon as I saw it I was blown away. That's my cover! I decided and so he polished it up and that was that. It was too eye-catching not to have!